What’s Next for Women Tech Entrepreneurs?

Women in the tech sector still fight an uphill battle for acceptance as just 2.2 percent of all venture capital investment in the U.S., or $2.3 billion of a total $96.7 billion invested, went to women-led startups according to TechCrunch. That’s why Upstate Capital, a nonprofit organization focused on increasing access to capital for companies and deal flow for investors across Upstate New York, is hosting “Women, Money &amp; Tech” on Tuesday, March 19 at REV Ithaca in partnership with Women in Tech at Cornell University.

Women Tech Entrepreneurs Struggle for Recognition
“Women own roughly 40 percent of all businesses in the United States, but continue to have trouble attracting seed money from venture capital and private equity firms,” said Noa Simons, Executive Director of Upstate Capital. “Research consistently shows women-led tech companies do as well as or even better than male-led ones, but we need to do more to change attitudes and help women and men both to recognize the influence of unconscious bias in decision-making. That’s why events like this one are so important.”

Few people understand the issues women tech entrepreneurs face and how best to overcome them than Elisa Miller-Out, Entrepreneur in Residence at Cornell University, and managing partner at Ithaca-based Chloe Capital, a seed-stage VC firm that invests in women-led tech companies.

“My work has a strong sense of purpose and mission. It’s no surprise that fundraising is top of mind for many of the female entrepreneurs I speak with both as a mentor and in my role at Chloe,” said Miller-Out. “In addition to connecting these entrepreneurs with sources of capital, I spend a lot of time advising them on team growth, finding co-founders, sales and marketing strategies, customer discovery work and more. We’re working hard to close the gender and diversity gap in tech entrepreneurship and we’re building a community in the process.”

More Women Securing Leadership Roles at VC Firms
Equally important, small but significant increases in the number of top women executives at venture capital firms are underway.  TechCrunch reports that women now hold 15 percent of the partner roles at accelerators and corporate venture firms, and founded 16 micro-venture funds in the past three years, accounting for 21 percent of all the new firms in that category.

Upstate Capital Executive Committee member Jennifer Tegan knows first-hand what it’s like to enter the venture capital world. She was the first hire of Ithaca-based Cayuga Venture Fund where she helped lead the transition from an angel group to a formal venture fund in 2002, eventually becoming Partner and Vice President of Finance/Administration.

“Women are as capable as men in venture capital. The real challenge is that the VC world is rather small, and when firm leaders recruit for open positions, they tend to hire those people that look ‘just like them,’ which traditionally has meant predominantly white men. That is a problem for women and people of color when they go out seeking capital. Funds that are more gender and racially diverse will typically invest in entrepreneurs that are more gender and racially diverse.  It is critical to spend time networking, as VC firms tend to hire and work with people with whom they have overlapping networks and connections,” says Tegan.

Unconscious Biases Huge Factor in Funding Determinations
“Many of the female entrepreneurs we work with face conscious and unconscious bias which impacts their ability to raise capital and scale their companies. In addition, many of them have significant family responsibilities including caring for young children and aging parents,” said Miller-Out. “That said, the women entrepreneurs I’ve encountered are such resilient, brilliant, hardworking, multi-tasking powerhouse founders that they do everything they can to push past these barriers. Given access to capital and a supportive network, there’s no end to what these women can achieve.”

This bias may help explain why among those entrepreneurs included in the Academy of Management study, men secured five times more financing dollars than women.

Embracing New Opportunities
Yet a recent study published in Harvard Business Review of female-owned and male-owned startups funded by Swedish VC firms found statistically no difference in the risk-taking, growth, growth resources and efficiency and profitability between how women-led companies and male-led companies seeking finance performed.

And research conducted by First Round Capital of its own portfolio revealed that companies with a female founder performed 63 percent better than its investments with all-male founding teams.

That same study also found that teams with more than one founder outperformed solo founders by a whopping 163 percent and solo founders’ seed valuations were 25 percent less than teams with two or more founders. This could be an upside for women as they often work more collaboratively than men.

As for the location of a tech startup, of the 200 companies First Round reviewed for its internal analysis, the 25 percent of those companies based outside New York City and the Bay Area on average performed as well as or slightly better than their urban peers.

“Building a successful startup community requires three conditions: a pipeline of innovative ideas often originating through college or university entrepreneurship or emerging tech programs; people who have the initiative, experience and acumen to execute on starting/running/growing a new venture; and access to money and resources such as those offered by Cayuga Venture Fund,” Tegan says. “We are one of the oldest and most active VC funds in Upstate New York, which perhaps helps explain the robustness of the startup community in the Southern Tier region.”

Women, Money &amp; Tech Event on March 19
To learn more about how women entrepreneurs and women investors are working together to change the status quo and maximize new opportunities, Upstate Capital is hosting Women, Money &amp; Tech on Tuesday, March 19th at REV Ithaca from 5-8 pm. Those interested in attending can register here. 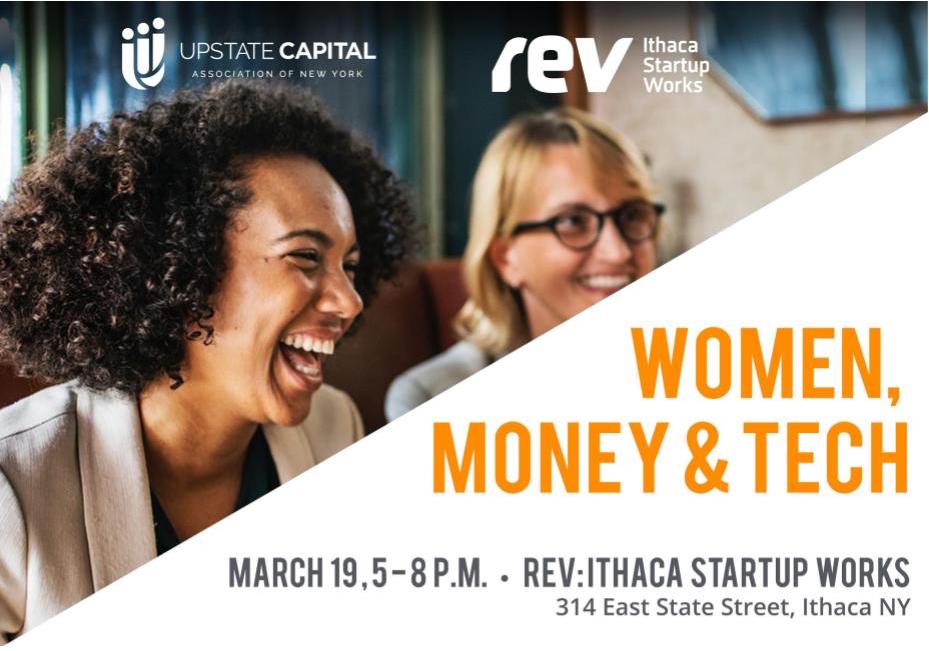 About Upstate Capital
The Upstate Capital Association of New York is a 501c6 professional non-profit membership association. Since 2003, Upstate Capital has been the place to meet capital providers – early stage, venture, growth, and private equity investors – as well as lenders, professional advisors, entrepreneurs and company executives – who are making investments in companies across New York State.