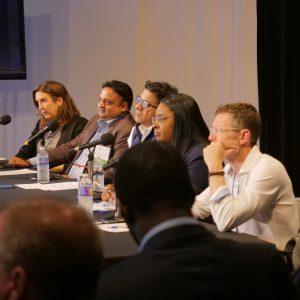 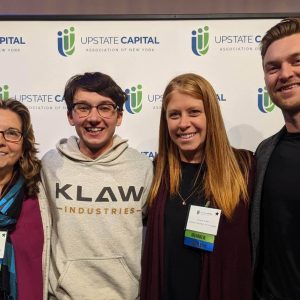 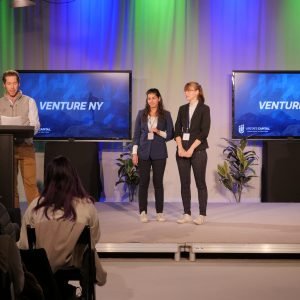 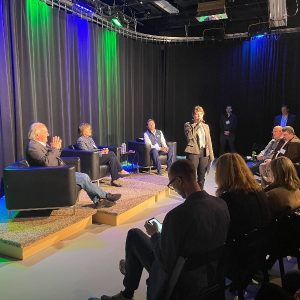 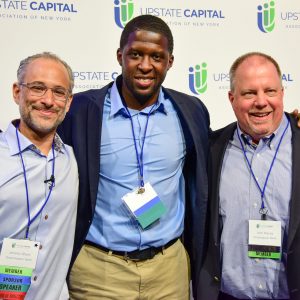 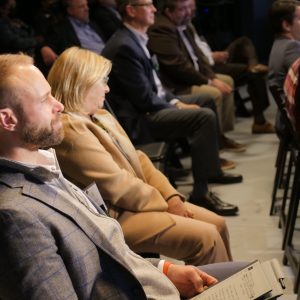 Meg O’Connell and Eric Allyn from the Allyn Family Foundation hosted a conversation moderated by Somak Chattopadhyay, founder and Managing Director of Armory Square Ventures. Meg and Eric are investors in innovation, both direct philanthropic investors and limited venture capital funds partners. Somak invests in high-growth startups and works with Eric and Meg to develop the regional innovation ecosystem.

Next, Sydney Bagrou from Grasshopper Bank moderated the second panel, Sources of Capital for Startups. Sydney is the Vice President of Technology Banking at Grasshopper Bank. He guided the conversation with Marcia Mitchell from NY Ventures, Adie Akuffo-Afful of Wefunder, Amora Miller of Republic, and Olivia Goldstein of Startfast Ventures. This group talked about venture capital and equity crowdfunding.

Upstate Capital members and invited guests took a walk across town guided by the “grandfather of Syracuse innovation,” John Liddy, as well as some of the region’s most prominent supporters of entrepreneurs, including Meg O’Connell and Eric Allyn from the Allyn Family Foundation. Guests had lunch at the Salt City Market, a food hall and community space for entrepreneurs to develop business skills and open food-based businesses. The Allyn Family Foundation funded the space as a “space for Syracuse to show itself off in all of its culture, glory, richness, and grit. A space for people to build generational wealth doing what they love. A space where everyone feels a sense of belonging, ownership, and civic pride.” Stops on the tour also featured TCG Player, the Technology Garden, and Density.

Over the past few months, student teams from across the state competed first at the regional level, then through two rounds of competition at the state level as part of the NYBPC. At Venture NY, the top team from six tracks competed for the Grand Prize, $15,000 in cash, and mentorship and connections from industry leaders from our ecosystem. The NYBPC has three goals: to develop entrepreneurial mindsets and skills, to build personal networks connecting students to organizations in New York, and to launch new ventures. The program started in 2010 and has served more than 6,000 students and helped launch hundreds of ventures.

The NYBPC was sponsored in part by the Techstars Foundation through their Accelerate Equity Program this year. The competition was selected through a competitive process, and they have invested $25,000 in the NYBPC and helped raise additional funding through their matching gifts program. Anchor sponsors for this year’s NYBPC included NYSTAR, the SUNY Research Foundation, and NY Ventures. Many other organizations have underwritten the program, including SEFCU, GENIUS NY, Rensselaer Polytechnic Institute, FuzeHub, Sandler Training, Phillips Lytle, Entrepreneurship at Cornell, and the CNYBAC. Over 100 people and organizations supported the competition with personal donations and corporate sponsorships!

Upstate Capital Board of Directors and the Director of New Ventures at the SUNY Research Foundation. SUNY RF is the largest university-based research foundation in the country. The top six teams from the statewide entrepreneurship competition competed for the Grand Prize by pitching their plans for seven minutes, followed by five minutes of Q&A with a panel of esteemed judges.

(Video below of student pitches)

While the judges deliberated, we were introduced to several entrepreneurs who are building high-growth companies across New York with 15 quick company pitches from Sean De Clercq of Kickfurther, PJ Bellomo of P1ston, Inc., William Testa of Direct Mail 2020, Jake Cutler of Ampli-fi.io, Herbert Dwyer of EMPEQ, Calandra Cruickshank of StateBook International, Alejandro Crawford of RebelBase, David Schropfer of SAFE, Inc., Matthew Fisch of FortMesa, Christine Tate of Vara Safety, Duff Archie of OffWeGo, Sam Eder of Big Wheelbarrow, Jay Schiff of Addinex Technologies and Khadesha Okwudili of Agape. David Brown, Upstate Capital Board member, moderated the pitches. Dave is Founding Managing Partner at Impellent Ventures, a Pre-seed, Seed, and occasional Series A venture capital firm based in Rochester.Early in the day, the CEOs of these startup companies joined in a private, closed-door discussion with Seth Levine, Noa Simons of Upstate Capital, and Jeremy Shure of Grasshopper Bank for a roundtable discussion.

The evening program started with Noa Simons, President & CEO of Upstate Capital, and Jeremy Shure, Co-Head of Tech Banking at Grasshopper Bank, introducing and moderating the keynote discussion. Jeremy and Grasshopper Bank have been incredibly supportive over the past couple of years, including co-hosting many CEO Roundtables as part of Upstate Capital’s event series, Invest NY, and nominating the NYBPC for Techstars’ prestigious equity investment program. Grasshopper launched in 2019 after being granted one of the few new national bank charters in a decade. The bank was established to serve the needs of startup technology companies and is recognized as a leader in banking for people and business owners who appreciate the efficiency of doing business digitally. The value proposition is backed by a strong team of relationship bankers who can provide hands-on support for entrepreneurs.

Jeremy and Noa moderated the conversation with Elizabeth MacBride and Seth Levine to talk about their book, “The New Builders,” where they are dispelling some of the myths about entrepreneurship in America today and helping to lay the groundwork for building systems for more diverse and inclusive entrepreneurship in the future.

From Boulder, Colorado, Seth Levine is a partner at Foundry Group, a firm he co-founded in 2006, which as of the end of 2020, had almost $3 billion in assets under management. As a passionate advocate for entrepreneurship, Seth also spends time as an advisor to venture funds and companies worldwide. The intersection of community and business has always been a driving force for Seth. He co-founded Pledge 1%, a global network of companies that have pledged equity, time, and product back to their local communities. He works with several funds and companies – especially in the Middle East and Africa – to help promote entrepreneurship and economic development.

Elizabeth MacBride, of Washington D.C., is a freelance writer and editor who frequently writes about personal finance, investing, entrepreneurship, and the economy. Her work has appeared in CNBC, BBC, Crain’s New York, HBR.com, Newsweek, and many others — and she is currently working on a new book related to her family history during the Great Depression.

The keynote conversation centered on what entrepreneurship means and how to continue building systems for the future. Upstate Capital members were given a copy of Seth and Elizabeth’s book.

The program concluded with the NYBPC Awards Ceremony, hosted by Noa Simons and Bonnie Ryan, one of the board members at Upstate Capital’s 501c3 foundation. Bonnie has a deep background in finance, banking, and startups and has been helping to develop an awareness of the NYBPC, particularly in the New York City area, this year.

The NYBPC Grand Prize Winner is Photonect from the University of Rochester. Photonect provides fiber-to-chip attachment solutions for companies like CISCO with proprietary technology that offers 10X time savings compared to current standards. The team founders, Juniyali Nauriyal and Sushant Kumar were awarded $15,000 in cash and mentorship and connections from industry leaders throughout our ecosystem of innovators.

Five special prizes were awarded, three of which supported under-represented founders and were sponsored by organizations that helped establish the award criteria. The NYBPC awarded $50,000 in cash prizes to more than 20 teams from more than 200 teams that competed.

The special prize winners include:

Gryt Award, presented to a founder with building a community as part of the business model – Step 2,3, SUNY Purchase

Tech Garden Special Prize, awarded to a historically under-represented founder that may become a Tech Garden resident, based in Central NY or a neighboring region – AI Learners, Cornell University